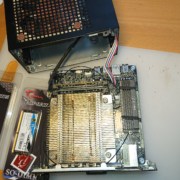 Summer is slowly giving way to a colorful autumn and I have a new test system on my desk.
The old “system”, an ancient Lenovo T410 from the stone age has really become too small, even for testing purposes, and often goes into thermal emergency shutdown.
So I bought a used ASrock Deskmini which was used as a game server.
With a super-efficient Intel i3-8100T and 64gb of (new) RAM as well as some older spare parts plus a few new parts, a quite performant system was created, which is also quite environmentally friendly and quiet.
The 500€ that this system cost (260€ only the RAM) came mostly from reserves of your donations.

What is currently happening is the conversion of all scripts to Windows10 and here to a large extent to WSL, the integrated Linux environment of WIN10 which, believe it or not, is actually quite mature. Now finally the, often buggy and specially adapted, Windows versions of Phyghtmap, osmconvert, osmfilter and especially everything based on GDAL/Python – can run native and always UpToDate in the Linux shell of Win10.
The effort for the conversion is unfortunately considerable, Python2 scripts e.g. do not run any more and must be rewritten, Windows has also naturally again some new bugs.

Therefore, as soon as the conversion to Win10/WSL is completed, the production system will be updated to a new motherboard + an AMD RYZEN + 128gb RAM and the development system will be transferred to the production machine.
Unfortunately we still need about 1200€ – so if you have some money left over from your christmas bonus it would help us a lot

The development computer will be handed over to @Michael who has been developing the OAM world maps for years and as an old IT-professional has the best prerequisites.
Michael will familiarize himself with the (by no means trivial) creation of the OAM maps and, in the long run, will also take over this task.

Want to join the discussion?
Feel free to contribute!


: Please support this project:
: with :

The summer is here = Traveling time for Admins